Following in the footsteps of Huawei, OnePlus and Apple, the unveiling will take place completely online.

It’s been a strange year for Samsung and other phone-makers, whose plans to go big into 5G and foldable phones have been largely torpedoed by the coronavirus pandemic. Despite Samsung warning that phone sales would suffer as a result of COVID-19 and the global recession, Samsung reported on July 6 that its profits are up as a whole — just likely not due to phone sales.

Read on for the top Galaxy Note 20 rumors, including all the specs we’ve heard of or think we know. This story updates frequently, so check back for the latest rumors.

Samsung Unpacked 2020 will take place Wednesday, Aug. 5 at 7 a.m. PT (10 a.m. ET, 3 p.m. BST) during a completely virtual event. It will stream on Samsung.com — CNET will also host a live show and cover the event with live analysis and news.

The official invitation depicts a liquid “splash” in the same copper color as the leaked Note (more on that below).

A short YouTube video posted by user Jimmy Is Promo shows a device purported to be the Galaxy Note 20 Ultra. We see a large-screen device, in black, with squared corners and a large camera module consistent with previous leaks. There’s also an S-Pen stylus to indicate this is part of the Note series.

The video demonstrates a few things:

On July 1, photos of a phone said to be the Galaxy Note 20 Ultra appeared online, captured from a Samsung website in Russia. Samsung seems to have accidentally leaked the image itself, and not just on one site.

On Twitter, journalists and phone fans also chimed in that it appeared on Samsung Ukraine and Samsung China as well. Engadget’s Richard Lai suggested it might have been an error affecting multiple Samsung websites in the Asia Pacific region.

Is it copper? Is it bronze? A July 10 tweet from frequent Twitter leaker Evan Blass suggests that the color, Mystic Bronze, will come to the Galaxy Z Flip 5G, too. Either way, the renders look beautiful so far. Seeing the play of light on the actual finish, in person, will make all the difference.

Now that one rumor has been confirmed — that the new phone will launch on Aug. 5 — there’s more credence now than ever that the Note 20 phones will go on sale Aug. 20. The rumored dates came early in June.

An Aug. 20 sale date also makes sense according to Samsung’s historical pattern. The annual August unveiling of nearly every Note phone is strategic, timed to predate Apple’s fall iPhone launch and set Samsung up for the holiday rush. It’s rumored that Apple may postpone its iPhone 12 sales release to as late as October as a result of the coronavirus.

What we know about the Note 20 specs

Twitter leaker Ice Universe dropped some spec details June 18 for the variant that could be known as the Galaxy Note 20 Ultra. While the image is of the Note 10 Plus and not the suspected Ultra as some outlets (including this one) originally reported, it’s expected that the variant will have two curved screens, whisper-thin bezels to free up maximum screen space, and a slightly thinner body overall compared to the Galaxy Note 10 Plus.

Without revealing the device name, Samsung announced in April that the company is making another Note phone. What we don’t officially know… is everything else. The company hasn’t announced the name — we’re going with Galaxy Note 20 in this article — price, announcement date, camera configuration or any new stylus tricks.

Last year, Samsung unleashed the Galaxy Note 10 and Note 10 Plus. It would be unusual not to see two new Notes this year. Numerous rumors support the expectation of a Note 20, Note 20 Plus and Note 20 Ultra, though the latest chatter is that there may just be the Note 20 and Note 20 Ultra.

Rumors suggested that the Galaxy Note 20 Ultra would be a whopper, with a screen over 7 inches at the diagonal.

Here are some possible Note 20 screen sizes promoted over the weeks, with details from Pigtou, Phone Arena and Ice Universe, citing additional tweets from Young that are no longer available (SamMobile posted the text here): 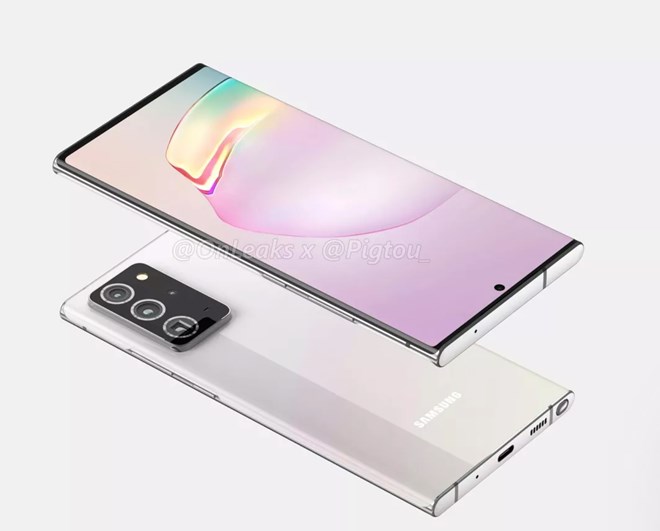 Samsung is rumored to be working on an under-the-screen front-facing camera. Some think the Galaxy Note 20 could be the first phone to use it. Then again, maybe not. OnLeaks via Pigtou

Ultrafast 120Hz screen could save more battery than the S20 Ultra

If the high-end Galaxy S20 phones got a 120Hz screen, it’s a smart bet that the Note 20 phones will have it, too. Phones with high screen refresh rates are a trend in the premium market. Any screen with an option to refresh each pixel more often than the standard 60Hz (i.e., 60 times a second) promises liquid-smooth scrolling and gameplay.

Frequent phone leaker Ice Universe suggests a more “fine-tuned” version of the feature. Danish blog Galaxy Club goes a little deeper, suggesting that the update will use 15% to 20% less energy than the Galaxy S20 Ultra, a phone whose review unit guzzled battery in 120Hz mode rather than sipped it. Here’s more information about the battery-saving 120Hz display technology, called LTPO.

The Galaxy Note20 will use a more fine-tuned 120Hz refresh rate technology.

5G is practically a given

We scarcely need a rumor to feel certain that the Galaxy Note 20 line will support 5G speeds. The Galaxy S20 phones do, with a caveat. There are some variants of the standard S20 that are 4G LTE-only in certain regions, such as Australia.

It may be that some carriers in some regions will also sell a 4G LTE version of the standard Galaxy Note 20, such as if the region is still building out its 5G networks, or if the carrier prefers a cheaper 4G version for its portfolio. Globally, we strongly suspect these will be known and marketed as 5G devices.

Here’s where US 5G plans stand now, and pointers on how to pick the best 5G carrier for you.

Precedent is as good a reason as any to assume that the Note 20 is what Samsung’s calling this phone — just look at the Galaxy S20 line. That said, precedent would also suggest we’d see the Galaxy S11 and Note 11. Samsung shook up its naming convention to align with the year. By that token, we could expect the Galaxy S21 and Note 21 in 2021. I can hardly wait for the Samsung Galaxy Note 32!

Now we come to one of my favorite phone topics: camera specs. Will the Galaxy Note 20 series have 100x zoom or not? The answer to this question has an interesting edge to it. Samsung proudly announced the Galaxy S20 Ultra’s 100x AI-assisted zoom called Space Zoom, a unique asset among the S20 range and one of the features meant to justify the phone’s stratospheric price.

If Samsung doesn’t include Space Zoom, as Twitter leakers Ice Universe and Sleepy Kuma seem to suggest (via the Korea Joongang Daily), it could be read as a rare admission of defeat on Samsung’s end that its marquee feature didn’t hit the right notes.

It should be noted that many of the rumor-fueled image renders and supposed leaks of case designs show square cutouts for large camera bumps similar to those on the Galaxy S20 range.

So what cameras could we see? According to the Korea Joongang Daily and Ice Universe (via Weibo chat app):

Frequent Twitter leaker Max Weinbach, who also writes for XDA Developers, agrees that the Note 20 Plus will have a 108-megapixel sensor.

What about the front-facing camera?

A juicy rumor is going around that the Galaxy Note 20 could use Samsung’s first-ever camera that sits beneath the display. If true, it means that the sensor wouldn’t be visible most of the time. It might be that you may only “see” the sensor when using an app that works with the camera, for example, to indicate where to look when you’re taking a selfie or video chatting.

We’ve compiled some possible specs based on various rumors, including from ZDNet Korea, Phone Arena and Galaxy Club.

We don’t even need a rumor to know that the Galaxy Note 20 will come with Android 10 to start with and upgrade to Android 11. That’s because Android 11 is in beta and isn’t ready for prime time.

Furthermore, Google postponed its virtual event for June 3 in response to the protests that began sweeping the US on May 26. The software giant intended to make Android 11 beta available to all Android users, not just to developers as it is now — a crucial step before releasing the final software update.

It’s entirely possible that Android 11 will be ready or mostly ready for carriers, but Samsung, which uses a complex software layer over the Android base, typically needs more time than other phone brands to fully test and release new Android versions. 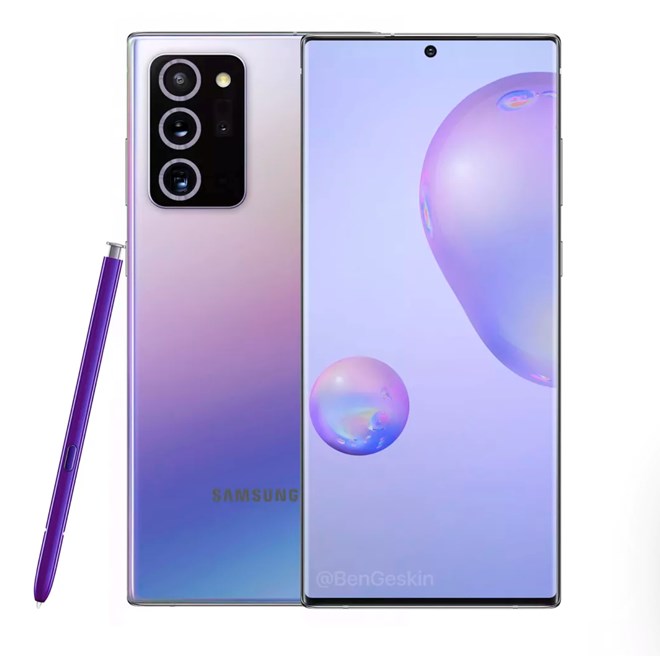 This unofficial render imagines what the Note 20 could look like with a purple stylus and blue-to-purple gradient finish on the back. @BenGeskin

Price: How much could the Galaxy Note 20 phones cost?

Galaxy Note phones are not for the budget buyer. Or at least that’s how the lineup has been since its early days. I’d expect the Note 20 and Note 20 Plus to largely follow last year’s pricing structure.

For context, two things changed in the last year to make the Note series more affordable and, Samsung surely hopes, more approachable, too.

Samsung’s second decision was to announce the Galaxy Note 10 Lite in January. Never intended for the US market, the phone nevertheless struck me as significant, suggesting that Samsung may be willing to change one or two “rules.”

At the time, I said, “Samsung’s impulse to create a ‘Lite’ Note completely reverses everything the Note has come to stand for as the brand’s best of the best. In making a cheaper, more basic Note, Samsung is also democratizing the Note’s most distinct and enduring feature: the digital stylus.”

Does that mean Samsung will surprise us with a Galaxy Note 20 Lite? Probably not at this event. But it does mean there’s a chance the standard Note 20 could cost right around $950 again. However, with the addition of 5G, which tends to drive costs up, the Note 20’s final cost is still uncertain.